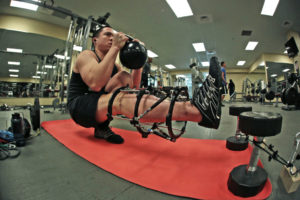 But it was when he went to Sicily after his deployment that his life took a sudden an unexpected turn. He was climbing with his friends when he plunged 40 to 60 feet off a mountain, breaking just about every bone in his body and narrowly escaping death.

“I don’t remember the fall at all,” he said. “The people I was with had to wave down a random Italian guy. He didn’t even speak English. They brought him over to me, and they said it looked like a murder scene. My leg was up by my head.” 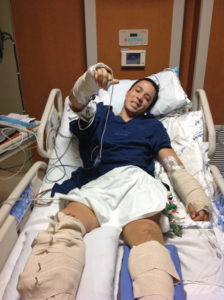 Lenahan was transported to a Sicilian hospital via helicopter, and his long journey to recovery began. He was soon transported to Germany for a couple of weeks and then sent to Walter Reed for the next five years. He spent two and a half years in an electric wheelchair, and “lost count” of the surgeries. All the while, he wasn’t sure if he was going to keep his right leg. He wore five different external fixators on that right leg over three and a half years.

Two and a half years ago, Lenahan got the last external fixator in his leg removed, and he got right back into what he loved the most: climbing. In June of 2018, he was able to make it onto the USA Climbing Paraclimbing Team, capping an incredible recovery.

“Last year I made it to 8th place in the world,” he said. “This year I bumped it up to 7th in the world. It’s been quite the journey.”

It was not an easy path to take. Besides managing an enormous amount of pain and relearning to walk multiple times, Lenahan had developed an addiction to methadone.

“They had me on the medication they usually give to people to get off heroin,” he said. “I was on that for a long time on what my doctor called a truck-stopping dose. Eventually I got to the point where I decided to just stop taking it.”

Going almost cold turkey on opiates is one of the most difficult things any person can do, but Lenahan was that determined to no longer be dependent on the drug.

“That wasn’t fun by any means for a good — let’s estimate a month or two,” he said. “There’s lots of sweating, not being able to sleep, and a bunch of other stuff you don’t want to know about.”

However, Lenahan eventually made it to the other side. And once he did, his thoughts turned to climbing. April 2018 was his first competitive climbing event, held at Earth Treks, the local climbing gym in Rockville, Md. 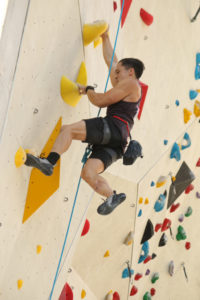 “This is how I found out about adaptive climbing,” he said. “I found the event through Facebook, read the description and exclaimed, ‘wait a minute, this is something I can do!'”

Out of eight competitors in that event, he finished in first place for his category and immediately set his sights on the next challenge. He and a buddy took a road trip from Maryland to Ohio to compete in the USA Climbing Adaptive National Championship in June of 2018, where he ended up in 3rd (his buddy got 2nd). That was good enough to get him a trip to Austria as part of Team USA.

He was named Wounded Warrior of the Year in 2019, and climbing hasn’t been the only thing he’s busied himself with.

“The goal is to start my own nonprofit,” he said. “I want to open a climbing gym for adaptive athletes and wounded warriors.”

Thanks to the Navy Safe Harbor Foundation, he was able to go through a program to explore 3D printing in OPNAV N415 with the goal of putting a 3D printing room in a gym so that it can print prosthetics and other adaptive equipment for people who want to be challenged but aren’t able to afford the expensive prosthetics necessary to undertake those challenges. The goal is that the 3D printing room would have an iPad with a catalog full of adaptive equipment that could be printed with the press of a button.

Lenahan also plans to build an Adaptive Obstacle Course so whether you’re in a wheelchair, blind, or a quadruple amputee, you’ll have a way to test yourself physically.

In the meantime, he was one of 15 chosen out of 80 applicants to the Dog Tag Bakery Fellowship Program. The program is geared toward post-9/11 veterans with service-connected disabilities who want to explore entrepreneurship and civilian careers. Lenahan hopes it’ll give him additional resources and networking to help turn the gym into a reality.

Lenahan’s life is a lot different from where it was when he first signed up to join the Navy in 2009. He’s excited to see what’s next and is ready to give back to multiple communities that he is a part of.

“It’s really crazy to think about where I was,” he said. “It’s been an incredibly long journey.” 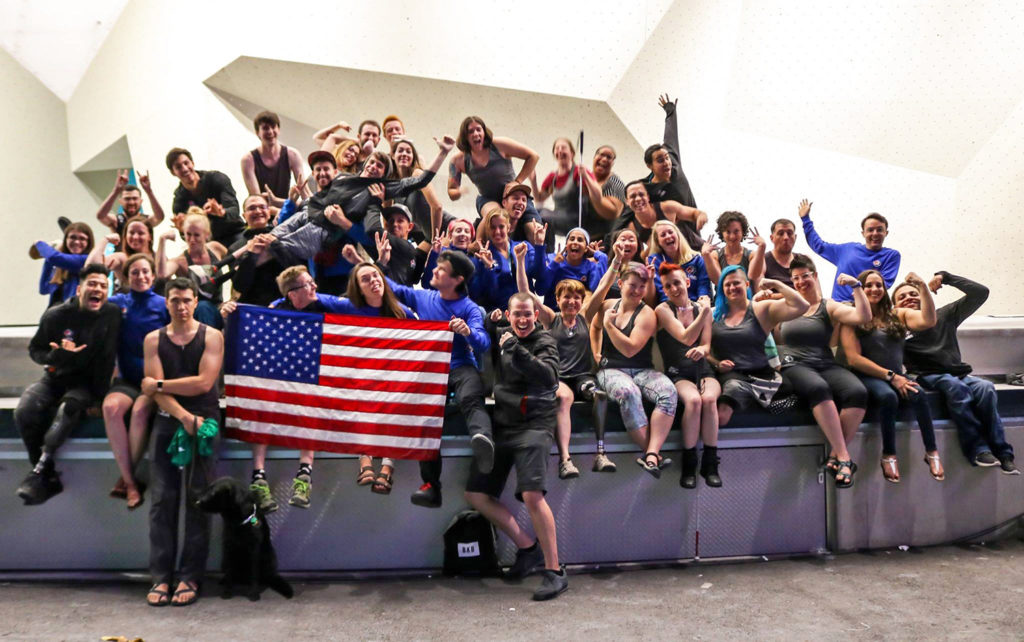 This site uses functional cookies and external scripts to improve your experience.

This web site is owned and operated by The Navy Safe Harbor Foundation. Your privacy is important to us. We will take every measure possible to ensure that all personal information collected is kept private. If you have any questions, concerns or complaints about our Privacy Policy please contact:

The Navy Safe Harbor Foundation only collects the information through this website that you provide us with, and only for the purposes of making business connections initiated by you. This information may be collected through email correspondence, telephone conversations, or filling out forms on our website. Again, this information is only collected voluntarily when you provide us with information about yourself, your business, or organization for the purposes of doing business with us. The accuracy and content collected is solely contingent upon what you voluntarily provide to us.

The information collected by The Navy Safe Harbor Foundation will be used solely for the purposes of carrying on ordinary business conduct, as requested and authorized by you, as indicated above. We will not send or deliver any unsolicited communications or communications outside of the reasonably prudent conduct of a business relationship. The information we collect will be used to create customer profiles for our records only, to be used during the course of our business dealings.

We do not disclose, reveal, share or otherwise disseminate any personally identifiable details about yourself, your business or organization to any third parties. We will only do so if required to do so by law or within the course of legal undertakings.

Like most web servers on the Internet, our hosting servers maintain access logs that record web browser activity. These logs associate an Internet Protocol (IP) address with each request for content from the servers.

Server logs, including these IP addresses, are used by The Navy Safe Harbor Foundation to analyze web traffic. Data from these logs help us to understand what information and services are of most interest to visitors in order for us to market ourselves as beneficially as possible.

In the case of abuse of our web site, we may report the IP address of a suspected abuser to the appropriate law enforcement authorities.

Our web hosting servers are able to use “cookie” technology to keep track of the browsers with which they are communicating. During a cookie transaction, a web server will hand a browser some data prescribed by the web site’s developers. The browser will return that data with its next request for content from the web site. Using this technology, it is possible for an application running on a web server to distinguish one web browser’s activity from another.

The Navy Safe Harbor Foundation website will make use of such cookies when required to identify ongoing sessions with individual online visitors. This includes associating a particular visitor with his or her own “shopping basket”; allowing online purchases or payments; preventing abuse of online surveys and questionnaires; and providing customized content and user-interface features to visitors who have specifically requested such services.

LINKS TO OTHER WEBSITES

This we site may contain links to other websites. The Navy Safe Harbor Foundation is not responsible for the privacy practices of those other sites, nor do we endorse the materials presented there. We encourage all visitors to review each site’s privacy policy upon arrival and before disclosing any personally identifiable information.

By accessing any of the pages within the Navy Safe Harbor Foundation website, you signify your acceptance of our Privacy Policy. If you do not agree to this policy, please do not use our website. Also, your continued use of our site following the posting of changes to these terms will mean that you accept those changes.

Where the information you are providing to us is sensitive, your consent must be expressed. The following are examples of expressed consent:

The manner in which your consent is granted may vary depending on the sensitivity of the information that you are providing to us. Where the information is less sensitive, implied consent will be considered appropriate.

NOTE: These settings will only apply to the browser and device you are currently using.

1. Terms
By accessing this website, accessible from: https://www.safeharborfoundation.org you are agreeing to be bound by these website Terms and Conditions of Use and agree that you are responsible for the agreement with any applicable local laws. If you disagree with any of these terms, you are prohibited from accessing this site. The materials contained in this website are protected by copyright and trade mark law.

The Navy Safe Harbor Foundation may terminate use upon violation of any of these restrictions. Upon termination, your viewing right will also be terminated and you should destroy any downloaded materials in your possession whether it is printed or electronic format.

The Navy Safe Harbor Foundation may revise these Terms of Use for its website at any time without prior notice. By using this website, you are agreeing to be bound by the current version of these Terms and Conditions of Use.

Any claim related to The Navy Safe Harbor Foundation’s website shall be governed by the laws of USA without regards to its conflict of law provisions.